Reaching the West with a Spirituality of the Margins

How to Reach the West Again is Timothy Keller and City to City’s newest book on starting a new missionary encounter with Western culture. We invited ministers from around the world to respond to, extend, and engage that vision.

Tim Keller’s How to Reach the West Again lays out a compelling proposal for how we might effectively engage the emerging culture of a post-Christian West today. I hope might enrich his proposal by suggesting that the manner in which we engage in his six elements may prove decisive. In particular, I want to suggest that the church in America today will need to unlearn a spirituality of the center and retrieve a spirituality of the margins in order to have an effective missionary encounter with the post-Christian West.

I am not suggesting that we should add “spirituality of the margins” as a seventh element to his list. Instead, I am arguing that this particular kind of spirituality must become the manner in which we engage all the other six. What do I mean by this? It may be most clearly illustrated by noting a kind of prayer that is all but missing in the Western church today: the prayer of lament.

A SPIRITUALITY OF THE MARGINS

Lament is one of the most common forms of prayer found in the Bible, yet is a form that has been almost entirely forgotten in the prayer life of the West (though scholars like Emmanuel Katongole, Nicolas Wolterstorff, and Soong-Chan Rah have done important work to help us start retrieving it). It may seem strange that the church today would nearly lose the most common form of prayer found in the Bible. However, it is not so strange when you consider our history.

Lament is the prayer language of those who live on the margins. Life on the margins is often marked by a certain powerlessness to shape the environment in which one lives.

For example, Israel was born out of a people of the margins. Abraham was a “wandering Aramean” in search of a motherland, and Israel was born as a nation in Egypt’s womb under the yoke of punishing slavery. The nation’s first experience after the Exodus was a liminal existence, wandering in the desert wilderness for forty years. Even in its so-called Golden Age under David and Solomon, it was a small nation surrounded by the superpowers of their day: Egypt, Babylon, and Assyria. Israel’s ultimate experience of marginality was in their exile: the city of God reduced to rubble and their people scattered to the four corners of a foreign and hostile empire.

It is in their experience of marginality that the prayer language of lament is birthed. When your world is marked by the real possibility of sudden, uncontrollable suffering, lament becomes part of the fabric of life.

Jesus himself was born into a situation of marginality—Israel, under Roman occupation, seething with all sorts of revolutionary impulses. The early church, too, was birthed on the margins of society. In fact, scholars like Larry Hurtado have shown that the first law in Rome to make certain beliefs illegal was due to the growing movement of Jesus’s followers.

In all of these situations, Christianity was marked by a kind of liminality. Out of that liminality grew a spirituality in which lament—a prayer that simply gives voice to suffering—was central. Surely, this “spirituality of the margins” had a deeply formative effect on the posture the earliest Christians took toward the world.

THE MALFORMATION OF THE CONSTANTINIAN WEST

In the West, however, the church has largely forgotten what it is like to live on the margins of society. With the rise of Christendom, Christianity found itself drawn in to the very centers of western power. When you become the superpower, lament no longer feels necessary or even relevant. After all, the world has been set up to work for you.

To be clear, I do not view the Constantinian experiment as an unmitigated disaster. I share Lesslie Newbigin’s perspective: when the ancient world exhausted its resources and turned to the church for new vitality, what could faithfulness be other than to respond? However, 1,800 years in the centers of power have surely had formative impact on the habits now deeply entrenched in the Western church. It is perhaps no wonder, then, that the language of lament has almost vanished from the church.

In what ways did the loss of lament and Christianity’s place in the halls of power malform the spirituality of the Western church? I can think of a few ways.

WHEN THE ONLY PRAYERS AVAILABLE TO YOU ARE PRAYERS OF PRAISE, CONFESSION, AND REQUEST, YOUR RESPONSE TO SUFFERING INEVITABLY BECOMES EASY, CAUSAL EXPLANATIONS, MISPLACED GUILT, AND PRAGMATIC SOLUTIONS.

Without lament, the Western church was left with inadequate resources to deal with suffering and hardship. The Western church was conditioned to respond to problems in what are now characteristically Western ways. When the only prayers available to you are prayers of praise, confession, and request, your response to suffering inevitably becomes easy, causal explanations, misplaced guilt, and pragmatic solutions. These are the instincts forged in the centers of power. It makes idols of knowledge, judgment, and quick-fixes.

When I look at the church in the West today, I see a continuation of these idolatries. Knowledge and truth are used as weapons to possess rather than mysteries to submit to. Judgment and guilt are doled out far too quickly and confidently. And a solutions-oriented pragmatism has pervaded the life of the church, both in its outlook on ministry (e.g. church growth) as well as its relationship to politics (e.g. the culture wars). Part of the challenge today is whether the church can unlearn these habits and retrieve habits a community that has thrived on the margins.

Fortunately, there are non-mainstream churches in America that have thrived spiritually on the margins for generations—namely the black church, immigrant church, and global church. As a result, there are resources available within the larger body of Christ in America to develop this new kind of spiritual life. But in order to tap into them, the churches used to being close to the centers of power will have to learn from churches that have historically been on the margins. This, I believe, will be the first step toward embodying a “truly post-Christendom evangelistic dynamic,” as Keller rallies for. Without developing the resiliency of marginal life, the church in America will struggle to rescue its gospel witness from its entanglements with power.

A COUNTER-CATECHESIS OF THE MARGINS

Beyond retrieving a spirituality of the margins, I agree with Keller that one of the keys to a missionary engagement with the post-Christian West will be a cultural counter-catechesis. However, I would suggest that the catechisms the church will have to counter are not just those of modern individualism (though that will be crucial), but also the cultural catechisms of Christendom. I am not at all rejecting the historic confessions and catechisms of the Protestant church. What I mean is the implicit catechesis that leads many Western Christians, particularly American Christians, to believe that retaining a position of cultural and political power is crucial to the very fabric of the Christian faith. I mean the implicit catechism that builds the trio of simplistic explanation, misplaced guilt, and pragmatic solutionism into the outlook of a Western Christian. Though much more careful thought will be required to develop this, I can anticipate some “You have heard it said, but I say unto you” pairings that might serve as the beginnings of this counter-catechesis:

THE MANNER OF THE MARGINS

Space does not permit me to develop how this “manner of the margins” might inform each of the six elements that Keller lays out. That is perhaps work that we will have to commit ourselves to. But here are some suggestions that might suggest a possible direction:

IS THIS A RETREAT?

All of this may raise the question of whether this return to the margins is in fact an abdication of cultural influence and responsibility. Is this a kind of separatist retreat? A soft Benedict Option? As a Kuyperian transformationalist, I don’t want to be misunderstood here! I will readily admit that a return to the margins can run the risk of withdrawal.

However, here again is where we would need to lean on the experience of churches that have historically flourished on the margins and yet remained actively engaged with culture and society. The black church, for example, largely embodies this kind of posture. First generation immigrant churches have perhaps tended to lean toward a separatist posture, if only because of the barrier of language. But second- and third- and fourth-generation immigrant churches are coming into their own and have retained a distinct communal identity on the margins while remaining engaged in the broader culture.

Scholar and rabbi Jonathan Sacks describes the Jewish experience using Jeremiah 29: living as constructive “creative minorities” that can seek the good of a foreign surrounding culture. The question that remains is whether the church in America, having grown up with power, can learn to follow the lead of churches grown up from the margins.

I believe it can, not because I am an optimist, but because a spirituality of the margins always grows out of a hope that defies all odds. As Archbishop Desmond Tutu said in the 1980s before the end of apartheid in South Africa: “[Here,] it is impossible to be optimistic. Therefore we must hope.” 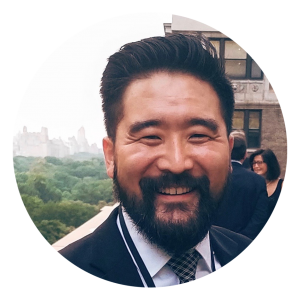 Abraham Cho
Abraham Cho is the pastor of Redeemer Presbyterian Church’s East Side location. He recently completed his Doctor of Ministry degree at Fuller Theological Seminary with particular interests in urban ministry, leadership development, public theology, and race and justice. He and his wife, Jordyn, have four young children, Lydia, Ezra, Micah and Judah.